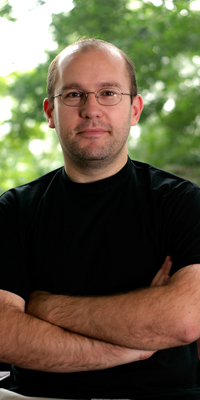 Dominik Brühwiler was born 1971 in Altstätten, Switzerland. From 1992 to 1996, he studied Chemistry at the University of Bern and Music at the Swiss Jazz School. Working in the group of Gion Calzaferri at the University of Bern, he received his doctoral degree in 2001 with a thesis on metal sulfide clusters in zeolites. After a postdoctoral stay with Heinz Frei at the Lawrence Berkeley National Laboratory, he joined the European Research Training Network "Nanochannel" as a Young Researcher.

In December 2004, he took a position at the University of Zürich as a research group leader and obtained his Venia Legendi in February 2011. In the same year, he moved to the Zürich University of Applied Sciences (ZHAW), where he is leading a research group with expertise in the synthesis, functionalization, and characterization of nanoporous materials.

Since 2017, he has been heading the Section of Polymer Chemistry at ZHAW. In 2019, he was elected to the National Research Council of the SNSF.